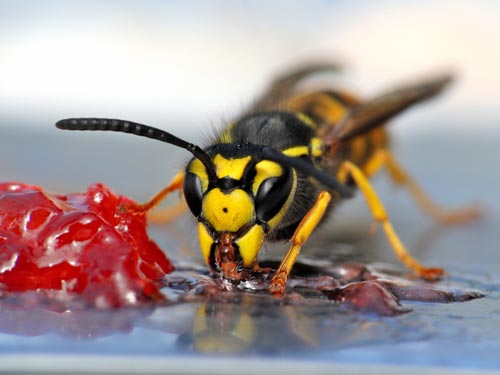 There are many species of wasp worldwide but the two common species found in the UK are the Common Wasp and the German Wasp. It is these two that are discussed below.

Both these species are social insects that produce large colonies. Equally both species are responsible for inflicting painful stings which in some individuals can cause allergic reactions that can be very serious.

After hibernating through the winter the fertilised female emerges the following Spring to look for a suitable place to start her colony, often in roof spaces, airbricks, sheds, garden borders and vegetation, the list is almost endless. She will not re use an old nest from previous seasons. She constructs her nest from chewed bark and timber and once complete lays between 10-20 eggs. At this stage the nest is only a few centimetres in diameter but as the eggs hatch the resultant offspring continue to enlarge it as the year progresses until finally it contains an average of between 3,000-5,000 individuals and sometimes many more. The nest may be constructed any shape to fit the cavity it occupies unless it’s suspended in which case it will invariably be oval, fawn to brown coloured.

Through Spring and Summer wasps feed predominantly on other insects, and unless in a particularly busy area may go un noticed. Towards the later part of the year as it cools and insects become less numerous they start feeding more and more on sweet and sugary items fruit, juice from waste bins etc, this is often when they become more of a nuisance.

In winter the adult workers and males slowly die off and it is the fertilised queens that hibernate, the survivors emerging again in spring to start new colonies.

How to prevent and get rid of Wasps

Preventing wasps from starting a nest can be extremely difficult as they can enter the smallest of gaps.

Due to the potential danger a wasp nest can be, we would recommend using a professional only, we appreciate this may be urgent to you and can respond and carry out treatment the same day if necessary.