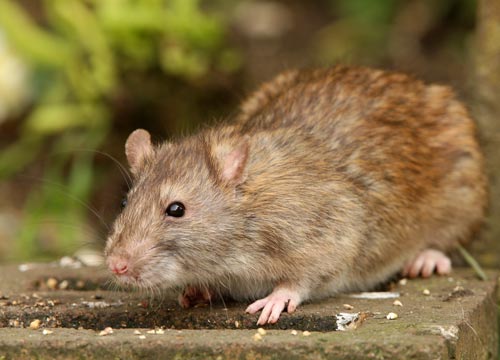 Rats are an extremely common pest in the UK and throughout the rest of the world with the exception of Antarctica where they don’t exist at all. Here in the UK the common, brown or Norway rat (Rattus norvegicus) is the species that most people will encounter. There is a second species which although very rare is also a potential health risk when encountered. This when found is generally associated with port or coastal areas and named the black or ship rat (Rattus rattus).

Both species are extremely rapid breeders. Each female can produce 3 – 12 litters per year with an average litter size of between 6 – 11 young, these are then sexually mature at about 3 months of age. Unlike most animals rats and also mice don’t have to wait until the original litter is weaned which can mean a female is ready to breed again soon after the original litter is born. In theory therefore rats and mice can give birth every 24 – 28 days, this can lead to a very rapidly increase in numbers.

Both these rats have a close association with man that has evolved over centuries, they can easily gain access to most properties.

Rats have to constantly gnaw in order to keep their incisors worn. This alone can cause huge amounts of damage It is claimed by the insurance sector that 25% of all electrical fires are caused by this habit of rodents gnawing on cable insulation. They also cause floods by gnawing through or puncturing waterpipes and can cause huge amounts of structural damage from the burrowing under foundations and sewers.

Rat infestations are unacceptable both in domestic and commercial premises. Property owners have a legal obligation under the Prevention of Damage by Pests Act 1949 to keep premises rodent free. Food businesses need to be more vigilant to rat infestation as they are subject to the Food Hygiene Regulations 2006.

Rats can ruin an organisation’s reputation. If clients and customers spot evidence of rodent infestation in the premises you manage, they are unlikely to want to do business with you.

How do I know if I have Rats

The surest sign of an infestation is actually sightings of rats and if seen in daylight this often indicates higher densities. Other common signs are:

This is best left to professional pest controllers as failed amateur control can sometimes leave the situation worse. Prompt action is recommended. Surveying the site we will adopt the best method we deem appropriate taking into account the extent of the infestation and all Health and Safety and Environmental requirements.