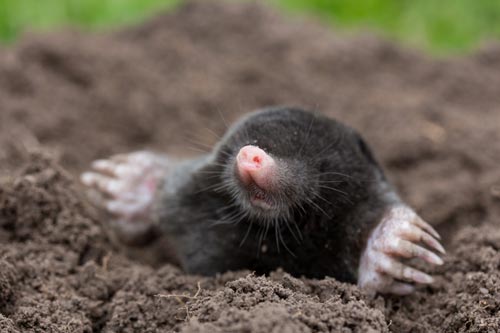 Moles are solitary in nature and live most of their lives underground. Their tunnel system covers an area of between 400–2000 square meters and may infest permanent grassland, woodland, parks, gardens, playing fields, cemeteries, golf courses etc. The most obvious signs of mole presence are the piles of loose soil which vary in size but will often be enough to fill a large bucket. It is often a surprise to landowners at the amount of molehills present which may be produced from an single individual.

Moles feed primarily on earthworms with slugs and other invertebrates making up a much smaller portion of their diet. Moles will not eat wheat based products as is sometimes marketed for mole control. Mole activity generally alternates between cycles of 4 1/2 hours of activity with 31/2 hours rest, day and night.

How to prevent and get rid of moles

Moles are not usually preventable but are controlled as and when necessary. With the banning of strychnine, the only serious methods of control remaining are generally considered to be trapping or gassing using aluminium phosphine. Both these methods require knowledge and or training and we would advise on the best method for each individual site.